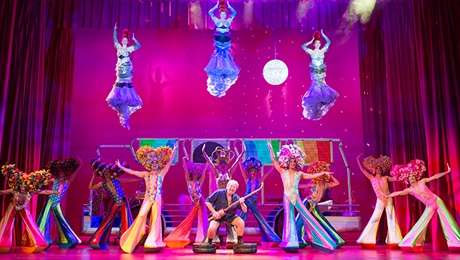 This festive season’s offering at the Playhouse is the non-stop party-piece that is Priscilla Queen of the Desert the Musical!  starring blue-eyed, angel-voiced Jason Donovan. Based on the 1994 film,this is a story of three friends who set of on a road trip on a battered old bus from Sydney to Alice Springs. Tick, a drag queen, has been invited by his wife to perform a show at a casino she manages, & takes oalong for the ride his two friends; Bernadette, an older transvestite, and Felicia, a young drag queen. Tick is apprehensive about the journey because he is going to meet his son for the first time, holding this information back from his two friends, needless to say when they do find out the shock factor is over whelming for them.

Never taking itself too seriously, Priscilla is a simply high-energy, action-packed glittering hit. This delightful musical is brimming with a steady stream of disco classics.’Girls Just Wanna Have Fun,’ ‘Hot Stuff,’Go West,’ & ‘Venus‘ are just some of many hits that you really just can’t help standing up to and having a boogie along with. From start to finish this show was fabulous & very, very funny… combined with a top-notch cast, eclectically outstanding costumes & a definite wow factor, Priscilla is without a doubt a must see. FIVE STARS